Embarking on a cycle tour of this length entails numerous unforeseeable circumstances: a spike in temperature, a rogue wind, road construction, etc. The TDA organizers try their best to forecast the day's conditions in advance so that riders can prepare for the road ahead. In camp, our tour leader beckons everyone to gather round a white board for the rider meeting. People in various states of exhaustion congregate next to the big truck while the details of the next day's journey are evoked. 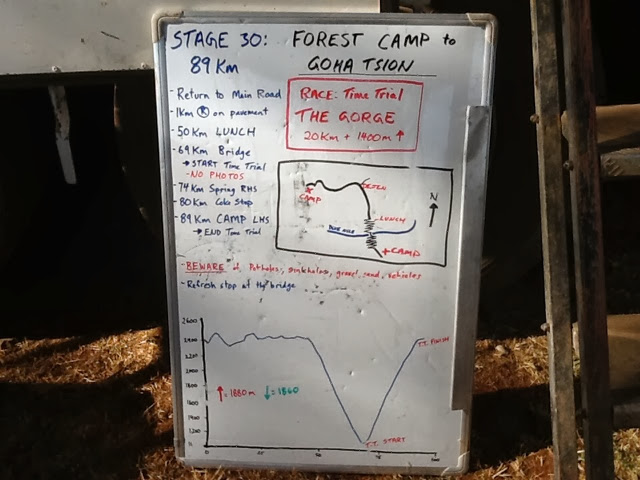 The graph at the bottom explains the elevation profile and, on the day in question, there was a time trial emerging from the Blue Nile gorge. As we emerged from camp on this day, the alleged "pavement" was, in fact, dirt for much of the way as road construction crews laid down aggregate and trucks spewed dust as they scurried in both directions. This sort of contingency is par for the course and one learns to just cope with however the road unfolds. Due to the capricious changes, Randy, our guru, qualifies the information given on the white board and asks us to be forgiving regarding inaccuracies.
As it happened, an intrepid group of riders descended into the gorge on a rugged, bumpy road where they had the option of being timed on the climb to camp where my friend Brian awaited with a stop watch and a gaggle of Ethiopian children offering soft drinks to the exhausted. Our mechanic, Alex, did the ascent in a mere one hour and twenty minutes. In doing so, he won a sibling rivalry as his younger brother Doug had established a staff record a year earlier. Ina de Visser, by far the strongest female cyclist on tour this year, accomplished the feat in an hour and forty-two minutes despite suffering from ill health. Most of us were chuffed to get up to the top.
Each day presents a unique challenge. The road is clear and yet the circumstances vary widely. What you see is what you get, including the aforementioned stone throwers, so an open mind and stamina stand you in good stead.
Posted by Unknown at 8:50 PM