The Aussie Ride: Nine Days Along the Great Ocean Road

Cathy and I signed up for this months in advance and the experience did not disappoint. It was a full-on expedition shared with more than 5,000 other cyclists who were drawn to the Victorian coast to do this iconic ride.
Bicycle Network is the organization that orchestrated this event. To support a mass cycle of this scale and length, countless hours are devoted to the logistics of feeding, sheltering and caring for a diverse band of riders. Though there are options to do the ride in relative comfort, most folks camp in tents pitched in paddocks or cricket/footy ovals. Each rider has a lanyard with a scannable card that entitles one to the meals provided thrice a day, including one in the middle of the day's journey.
We were fortunate to have loaner cycles from our good mates in Melbourne. Cathy rode Alistair's Giant while I rode Robert Villella's Scott. Both bikes were sleek, lightweight road bikes that served us well. Nary a puncture over the 650 kms! Featured below are Cathy and our kind friend Keith who drove us to the start of the ride via Hamilton, a quaint western Vic town. The bikes we rode are mounted on the rack attached to Keith's Subaru. 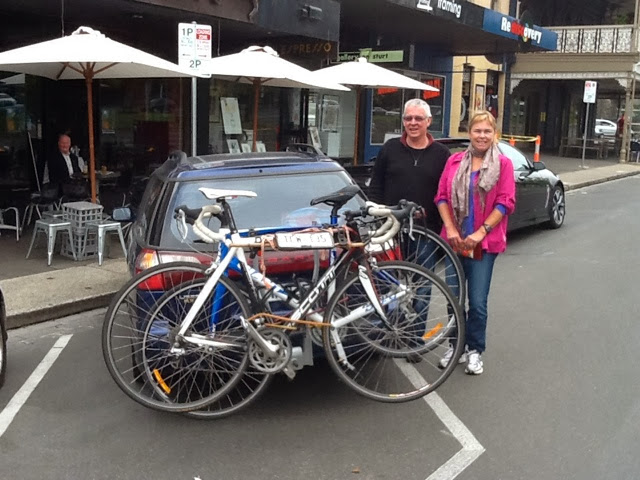 The ride began with a miserably rainy day that included a headwind. It was a mercifully short day, only 42 kms., but it set the tone of the ride in the sense that one needs to face adversity and bash on with grit and a positive attitude. We conquered it and were rewarded with a wet camp. Given that our two years of living in Melbourne were in drought, the rainfall was mildly surprising.
The remainder of the ride was smooth and we grew in strength as it progressed. We established a rhythm whereby Cathy pushed out of camp shortly after breakfast and I would get our bags in the truck before following her. We maintained different paces which reflected our tastes too. Cathy is far more observant and therefore stopped to take lots of photographs of the surrounding landscape. As we were following the coastline, the view to our right was often a gorgeous seascape. Thank goodness Cathy had her wee IPad with her for the duration.
The midway point offered us a rest in Port Campbell which is a sleepy cove on the western edge of the Otways. It was a brilliant sunny day. We lolled around in the town and even went in the ocean to cool ourselves. I will always remember an exchange with a trio of men in their 60s and 70s who had done the ride several times. One bloke, Ted, had done it 17 times and he was undaunted by the upcoming Lavers hill! a climb of about 500 meters.
The second half presented the group with both elevation and descents. The former require a steadfast resolve and core strength. The latter afford you the value of gravity and yet one becomes concerned about excessive speed. We stayed to the left and had our left hand judiciously poised to engage the rear brake.
The penultimate day culminated in Torquay along the surf coast. If you have not been there, go. Even for those not inclined to surf, you will appreciate the grandeur of the ocean. It is is rugged and inspiring.  We gathered in the coastal town of Lorne before being allowed by the local traffic cops to cruise onward to the surf town for our final night in a tent.
The final day brought us close enough to a "city" that one could distinguish between the laidback pace of a country road and the buzz of an urban or suburban highway. However, we did pass through the wonderful communities of Barwon Heads and Ocean Grove (home of Cadel Evans) en route to the final ground in Geelong. It was a lovely end to an eventful ride wherein we met so many interesting folks, mostly Aussies, who came together bonded by a love of cycling and the open road.
Posted by Unknown at 2:18 PM No comments:

The Great Victoria Bike ride is an annual event down here in the Melbourne universe. As cycling culture grows in this city of 4,000,000, more people participate in active transport. The great Vic draws school groups, elderly, and competitive bikers to do a different route that generally begins on the periphery of Port Phillip Bay and follows country roads to the city.

Cathy and I begin the 610 km. journey on Saturday November 23rd in the south Australian town of Mt. Gambier. Nine days later, with a rest day mid-tour, we will roll into Geelong. It will be a relatively flat route along the ocean road which straddles the coastline. There are some climbs which will test our mettle.

We have done some rides in town. Melbourne has some lovely cycle tracks and we have availed ourselves of them. One needs to have one's head up as cars rule here as they do everywhere. 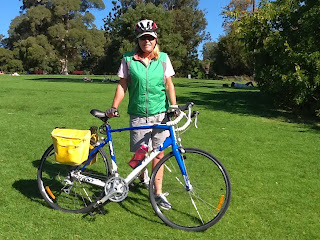 We have been here a week. We are getting used to the roads and the cycle paths. Melbourne is generally bike-friendly, especially for a city that also has a robust car culture and a massive metropolitan area that is not particularly well-served by public transit.

It is spring time in Australia. The weather has been alternately warm with brilliant sunshine and gray or overcast with strong winds from the Antarctic. The flowers are in bloom and we are reacquainting ourselves with the native species: banksia, wattle, eucalyptus. The city has reserves or parks throughout. With cricket and footy being the two dominant sports, ovals are on sprawling grounds where there are also tennis courts and, sometimes, pools.

Our hosts have been uniformly welcoming and gracious. The food is almost all local, proudly Aussie. And the quality is excellent as this land is blessed with a rich variety of  produce, fish and meat. Add the bounty of fine wine and cold beer and you have a generous feast.

Posted by Unknown at 5:27 PM No comments: 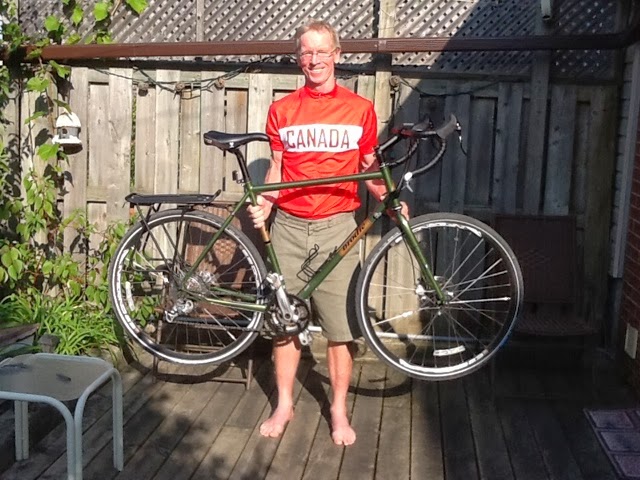