Four of theTDA cyclists arrived in the wee hours of this Tuesday morning at Khartoum airport. Much tour relief, the bikes arrived intact along with our bags. We were met at the airport by a representative of our hotel and he helped navigate us through immigration and customs with the standard fees paid to the officialdom on duty. Our truck was stacked high with four bike boxes and all our gear. Again, the stuff arrived without loss. Some Sudanese night clerks let us in to the Hotel Acropole, owned and operated by Greeks, and we crashed.
After necessary sleep, I met some of the support staff and fortified myself for a walk out into a chaotic, bustling city devoid of navigational aids. Equipped with a Khartoum map that was not even close to scale, I set out in search of the Nile. After an hour or so of following my intuition, I stopped and asked a local man where the mighty river could be found. He pointed me north to the Blue Nile which enter Sudan from Ethiopia and joins the White Nile that flows to Cairo. 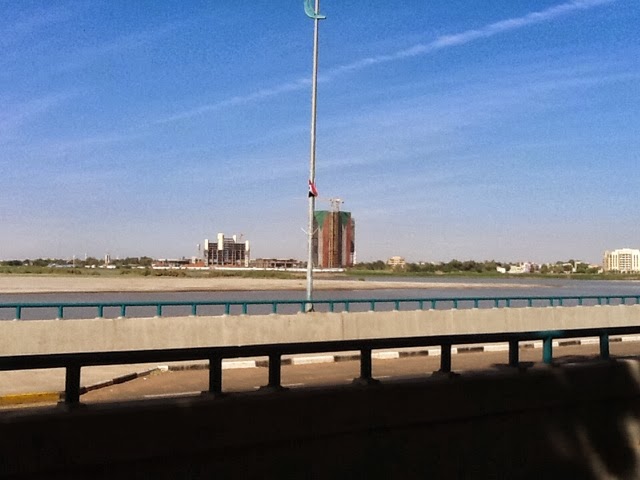 I would include other photos but I was approached by an armed soldier who asked me to delete some shots. Apparently, some government institutions are not to be shot by tourists. There are plenty of embassies, consulates and foreign investment structures by the river. As one walks away from the river to the south, you enter a crowded, hot city which does not have sidewalks. Pedestrians beware as you often share the road with buses, cabs and trucks. Women sell nuts and fruit on the footpath. Men in uniform stand and lend a semblance of order to the mad swirl of human traffic. 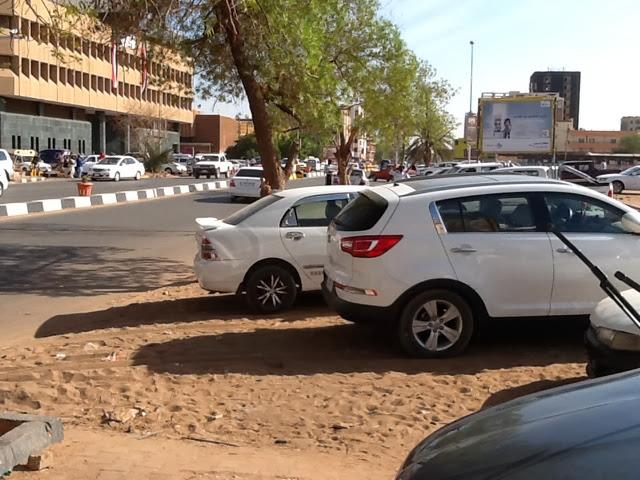 Cars are everywhere, mostly Japanese, and they are often being washed by boys who must earn a living doing so as the sand must stick to the car after every use.
My first impression is that the people who speak English are very kind. Many are fluent in Arabic. I can exchange pleasantries with them but nothing more. Language opens avenues of exploration. Today, I roamed without a compass and appreciated how different this environment is. The Islamic culture is ubiquitous: the minarets, men praying on the mats set up on the footpath, and women in hijab/niqab. For hours, I was the only Caucasian around and this vulnerability reminds me how it feels to be a stranger.
Posted by Unknown at 7:06 AM