Having flown here Turkish Airlines, I was expecting to catch a flight to Khartoum last night with my co-rider Catharine and the tour leader Randy. To condense the story, the plane took off with my friends and without me. We had all visited the departure gate well in advance. Restless to explore and stretch my legs before the connecting flight, I walked around and returned a half an hour before the scheduled flight time only to discover that the gate was closed. Turkish Airlines apparently have a policy of rejecting any latecomers regardless of whether the plane is still loading.
Fortunately, this embarrassment was not experienced alone. I met a man from Kosovar who also missed it and we commiserated. We sorted out how to get on the next flight (which is today) and caught the metro into town. En route to Sultan Ahmet, we bumped into a Brazilian fellow who was looking for a hostel. We found accommodation and bunked for the night. 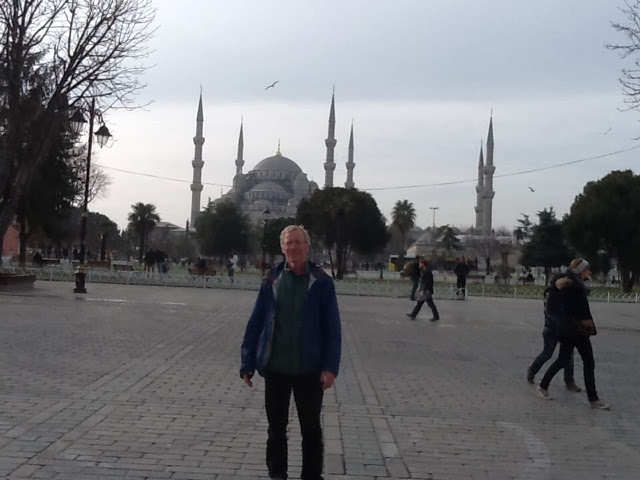 This mishap allowed me a day of sightseeing in Istanbul, a city with which I am unfamiliar. Given my appearance, I was an easy mark for the carpet salespeople. Even so, the inevitable spiel included a tour of the standard sights: the Blue Mosque, the basilica cistern, the Egyptian columns, etc. after the obligatory cup of local coffee, I wandered down to the water and hiked for several kilometres. It is a dense city that straddles the European commercial connection and the Islamic history of the region. My local guide, Murat, just finished his compulsory military service and he managed to teach me the pleasantries in Turkish. The mere attempt to say thank you in another tongue ingratiates one to the community, no matter how badly you pronounce the courtesy. 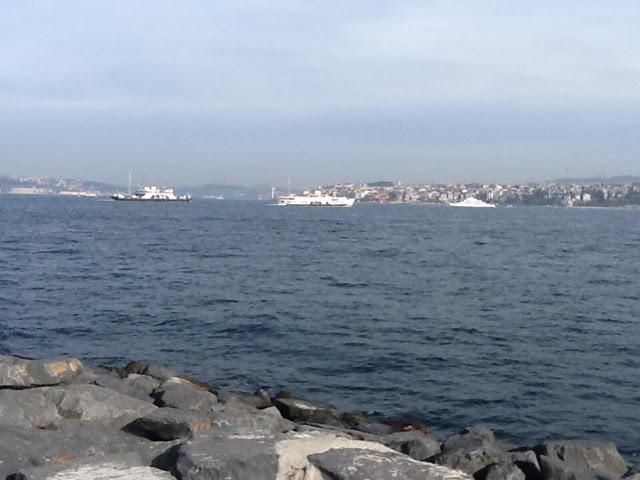 The Bosporus with ferries crossing. A curious phenomenon was the cat population that appears to live on these rocks, fed by locals.
Posted by Unknown at 6:41 AM