Four Days Across The Desert

We set out from Dongola by crossing a bridge over the Nile. The vast sandy landscape extends from either side of this lifeline. The further one strays from the river, the less vegetation one sees. It becomes an ocean of sand, rock and rugged weeds: unforgiving and barren except for camels.
The first day was relatively easy. The distance was moderate and the road was smooth. Some TDA cyclists were "racing". They try to win stages by posting the fastest time. My approach is expeditionary. Making it to the lunch truck and subsequently to camp is a modest goal. The energy and water required to do so compels me (and others) to be conservative. Pacing is crucial so the various groups of folks I ride with tend to be in it for the long haul. To date, about half the 30 Khartoum to Capetown participants have maintained their EFI status. That is: they have rode every inch or millimetre. 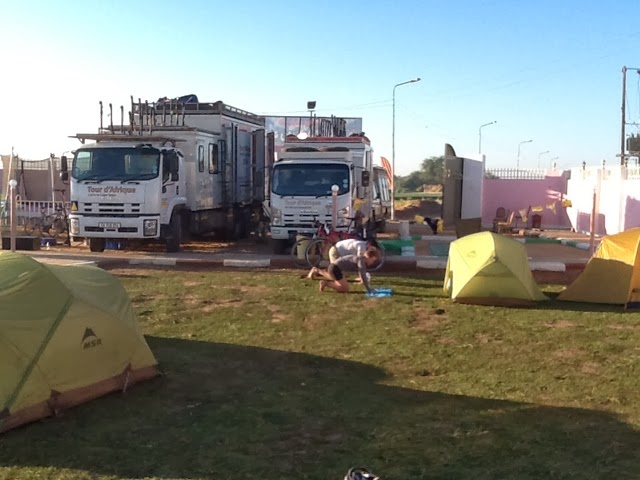 There is also a parallel competition to see if any soul can stay every night in her or his tent. Given the absence of modern conveniences such as toilets, showers and laundries, the aspiration to camp for four months is only for the intrepid and well-organized. Pitching the tent and setting up a cot to sleep comfortably is not optimal after pedalling for seven to ten hours. Soup is usually available courtesy of Yanes the cook and most individuals sit and fortify themselves with the quenching broth. 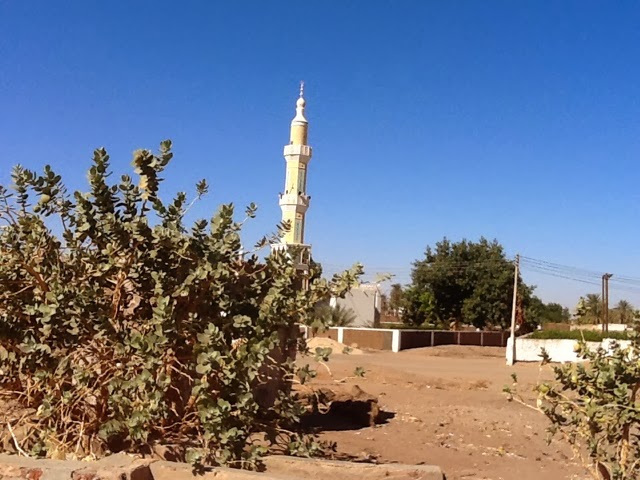 Salaam. Wherever you are in the Sudan, the sight of a minaret and the call of the muezzin is not far away. Of the five pillars of Islam, the morning call to prayer is most evident here. The invocation to pray is broadcast via loudspeaker in towns. This morning, it was high volume and resonant throughout our park campsite.
Men in white, flowing robes dominate the marketplace. In towns, the cargo vehicles share space with tuk-tusk and donkey carts. One needs to be wary as a pedestrian that one does not venture close to traffic. There are no sidewalks so everyone who is not in a vehicle shuffles in the dust at the side of the road. Below you see five of my comrades walking into town on a common surface. 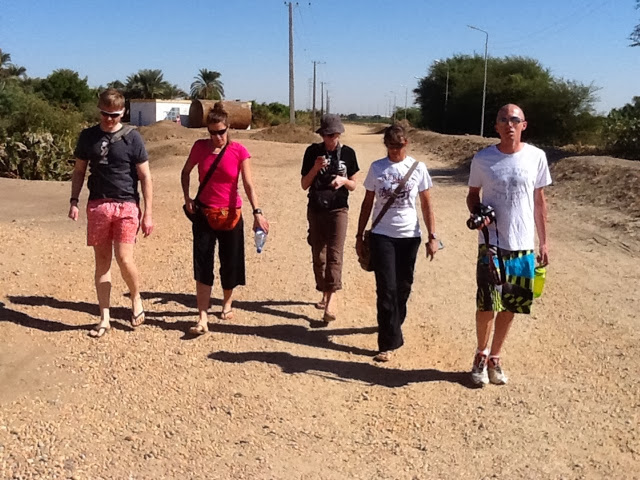 There are some sectional riders but most of us intend to make it all the way to Capetown. To do so, you need mental strength as there can be injuries, illness and accidents. To date, there have been a few spills. A German-Kiwi woman, Birgit, went down in a peloton along with an American guy, Mateo, as their wheels rubbed and they spun out. Fortunately, neither was seriously injured though both had to be driven into camp. Both resumed riding the next day with vigour. Another unfortunate touch was a contact between the strongest female rider, Ina from the Netherlands, and a male racer. Ina's front tire hit David's rear tire and she ended up in the ditch with a couple of gashes. Medic Hannah stitched her up and gave her anti-biotics. Undaunted, Ina completed and won the stage, all the while maintaining a positive attitude.
Posted by Unknown at 1:58 AM